Today we’re releasing a new trigger for Rules: Scheduling With this option, you can automatically trigger a run daily at a specific time.

Looks like it's time to schedule some nightly runs! 😴

Follow this link to learn more about the Rule feature!

Automate your iOS Pickers in a snap 🪄

We’ve introduced a major improvement to the way iOS Picker tests are created and maintained! Instead of manually scrolling to your desired values using multiple interaction steps, you can now select all desired values within a given picker in one step.

We’ve also added the ability to “Automate” your picker interactions. If your test case requires you to move a picker wheel up or down by a certain number of steps, flip the “Automate” switch on!

We’re excited to launch Rules : a fundamental addition to our platform! 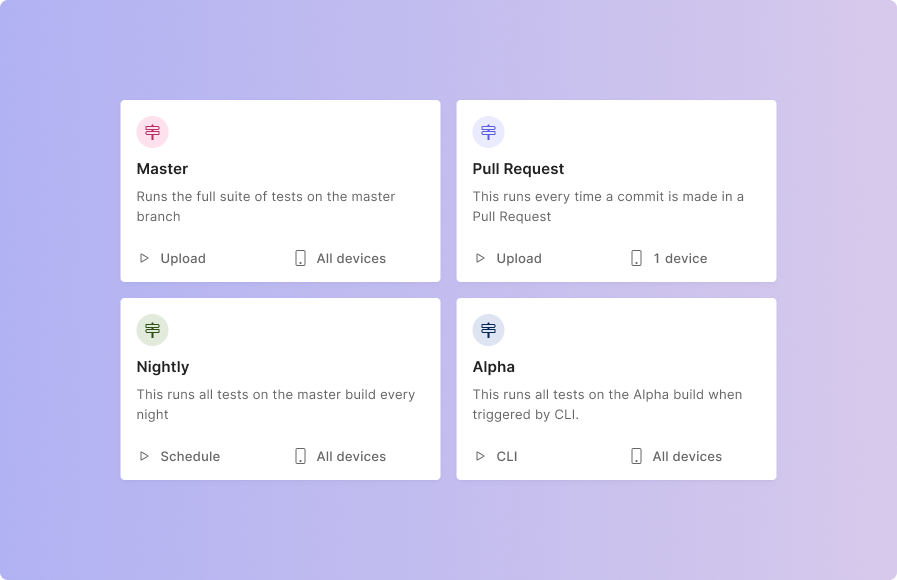 Once you create a significant amount of tests, it becomes tricky to know how they depend on each other. To simplify that, we are introducing the dependency view.

This new tree view is now available from the top dropdown menu on the Tests page.

Lastly, we enabled the bulk-delete operation (in the action bar). If the tests/folders you try to delete require you to delete other tests/folders first, we will let you know the global impact beforehand.

The similarity assertion ensures that the expected and actual states are structurally similar. It uses a score based on the number of elements, their positions on the screen, and their attributes. It does not take into account how they look pixel-wise.

From now on, you can always inspect screen structures by hovering the similarity assertion (both in runs and tests modals). Comparing the actual and expected screens that way can usually explain why they look pixel-wise identical but have less than 100% similarity. 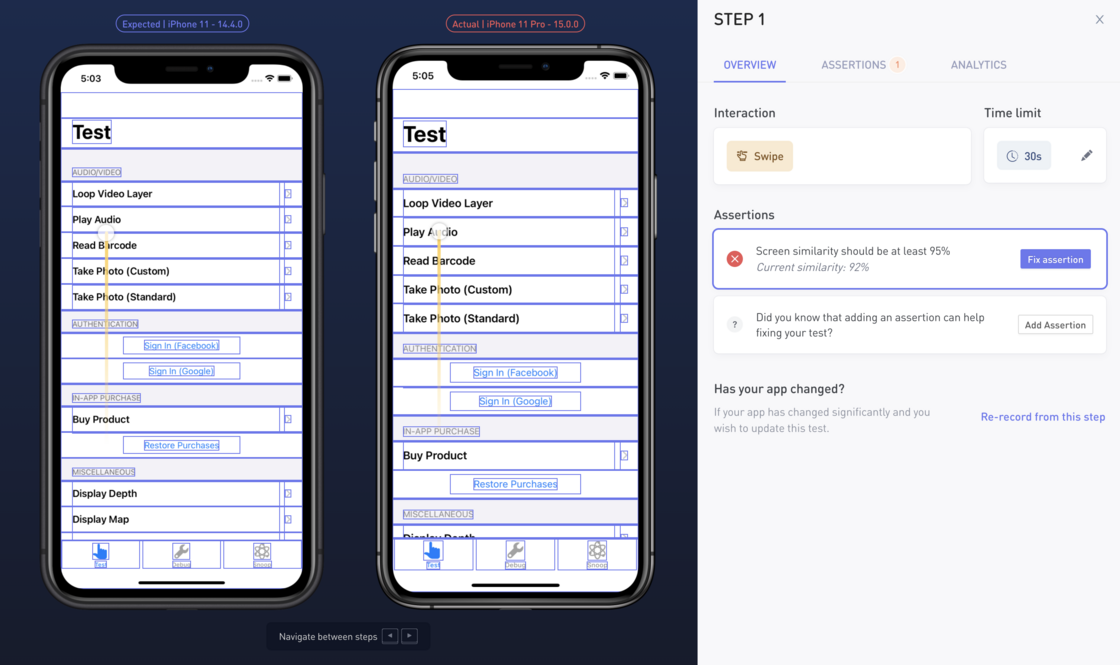 Only Be Notified When Tests Fail 🔕

You can now opt out of notifications for successful builds!

If you prefer not to be notified via email or Slack every time your test run finishes without error, you now have the option to skip these notifications.

Likewise, to skip Slack notifications, simply go to Settings > Integration and click on the Send notifications for failed tests only checkbox for each application.

We are releasing a new UI for the recorder!

In addition to refreshing the overall design, we’ve gotten rid of the intermediary modals and added the number of steps for each dependency. Device preparation is now displayed on the same screen, which allows you to review the previous test steps before interacting with the device. We believe this will improve the experience and readability when creating, updating, and repairing your tests.

As a bonus, links into the recorder can now be shared for the update and repair flows. Feel free to do so when collaborating with your coworkers on test suite maintenance.

Not only is it now larger, it is also collapsible and clearly differentiates variables from suggested inputs.

The Variables modal has been upgraded as well. You can create a pattern using any combination of random Letters, Digits or Hexadecimals. Simply type # in the definition input box and choose your pattern. This should cover the vast majority of your scenarios.

We are thrilled to announce that we are now offering to run simulators on Mac Silicon.

The reasons are obviously stated by the below video. When it comes to iOS 15 especially, Apple has really optimized performance for Silicon (or not optimized at all for Intel 🤷‍♂️).

We will soon require that all iOS simulator app builds uploaded to Waldo support the arm64 architecture going forward. And this is already a requirement in order to run your app on iOS 15.

You can check what architectures you're currently building for by going to the Builds section of https://app.waldo.io and see if it lists arm64.

If arm64 is already listed, you need do nothing. On the other hand, if you currently build your iOS simulator app for the x86_64 only, you will need to adjust your Xcode build configuration. Read on for details on how to accomplish this (spoiler: it is very easy).

How to build your iOS simulator app for the arm64 architecture

Xcode 12.2 and later automatically adds the arm64 architecture to the list of standard architectures for all iOS simulator binaries, including apps and libraries. During the debugging and testing process, Xcode builds only for the current system architecture by default. However, it automatically builds a universal binary for the release version of your code.

We recently made significant improvements to Waldo CLI, the Waldo Upload Bitrise step, and the waldo Fastlane plug-in. For best results, please ensure that you are using the most recent version of these tools in your CI workflow.

Refer to our document on CI Integration for the latest details.