We've been using UserVoice for quite some time for feature suggestion, FAQ and customer support contact widget: 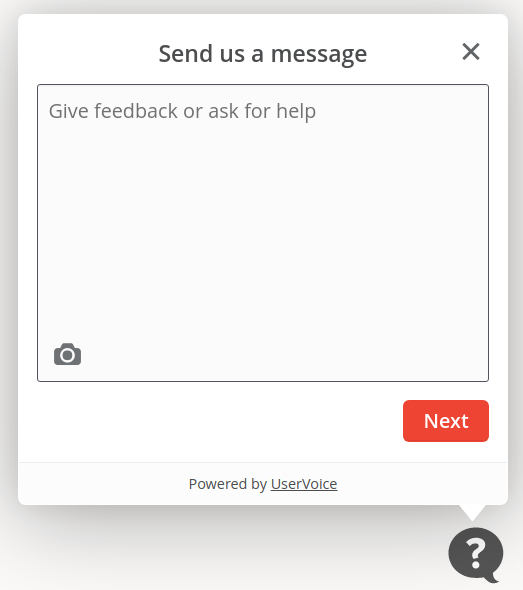 The thing is in the end this was just a very limited UI for an email, as support is anyway handled the same way and by the same person (me) on support@updown.io.

And among the years we hit some deliverability issues, likely caused by UserVoice not supporting proper DKIM signing. Also some clients had bad experience because they thought this was a live chat. Overall many opportunities for frustration.

So in order to address this problem in the simplest way possible – and as UserVoice is not gonna change soon – I decided to stop using this widget in favor of direct email. Twitter is also an option for people still using it ☺

I slightly reworked the footer to make the Support button more visible to compensate for the widget button being gone, also it'll now includes the account name in the subject by default:

For a while, French clients have benefited from a 0% VAT because we were VAT exempt in France 🥖 but unfortunately good things don't last forever. updown revenue keeps increasing (thank you 🙇), this means we are no longer VAT exempt and have to start collecting the French VAT (20%) for individual and company purchases from France, starting September 1st 2021.

↻ Note that if you have auto-renew enabled, the subsequent payments after September 1st will automatically include the VAT.

Do not hesitate if you have any questions.

After a couple months of private beta we are now releasing multi-site status pages (example): 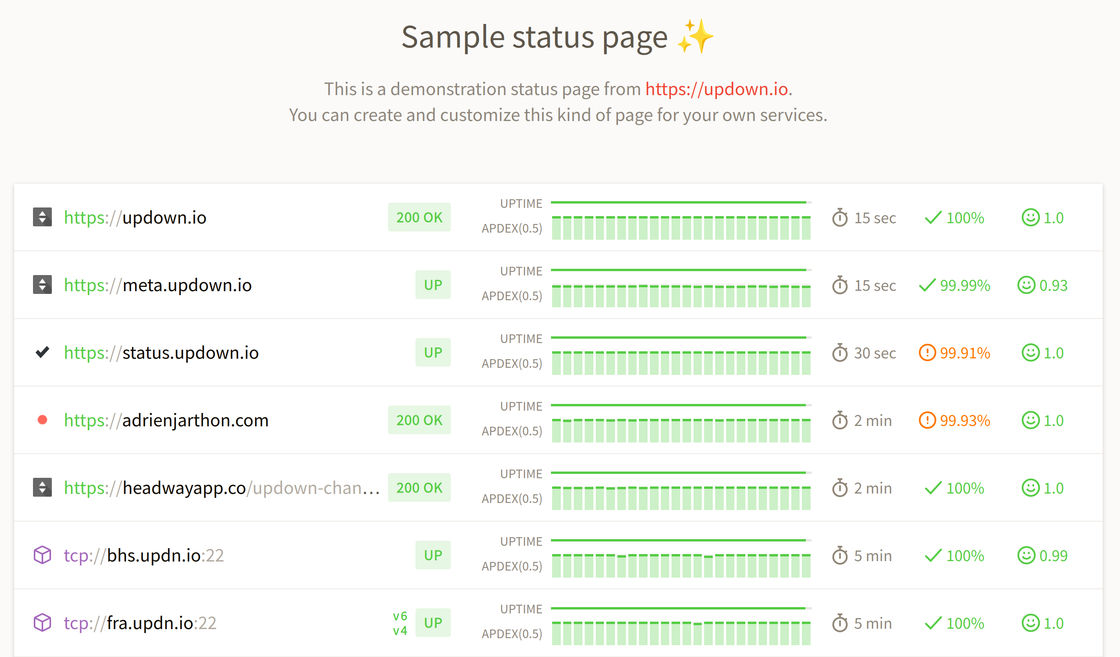 You can choose the title, description, list of checks to show and customize the order. It's also possible to serve them from a custom domain like we did for single-page status pages. By the way if your single-site status pages are public, they'll be accessible from the multi-site status page. You should easily find the new feature in the (slightly reworked) top menu:

This was one of the most requested features of all time, and more options will surely come later. Let us know what you think and what you would like to see in the feedback tool or by contacting us.

Also part of this release is a new system to connect custom domains to single-site or multi-site status page, using an additional TXT record instead of only one CNAME:

Don't worry the previous system using only one CNAME is still working and will not be removed anytime soon but you are encouraged to use the new one. The new setup page (which should make it easier to debug problems by the way) will only help you using the new way.

We've been using BitPay to accept Bitcoin (BTC) and BCH payment for a while now, but they recently broke our account, without any reason or warning, their support is not responding (of course) and considering the poor reputation and compatibility they created, we didn't even care wasting our time trying to get it back.

Instead we worked on replacing them by a new provider, and took this opportunity to improve our cryptocurrency support. We searched for a solution with at least:

After some research we settled on CoinGate as our new provider, they checked all the boxes and even support a lot more altcoins. So starting today you'll find a new payment form which should be easier to use: 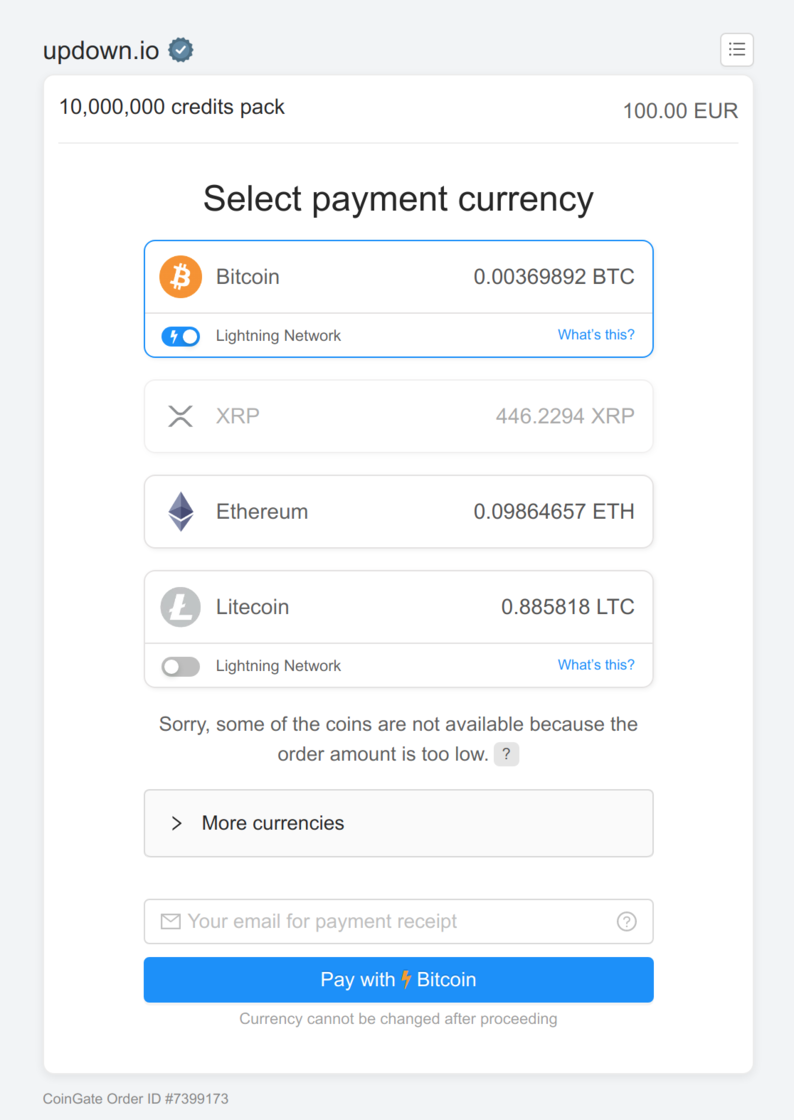 (the email address is not required)

Please give it a try and let us know if you have any problem with this new provider or if you would really like to use another altcoin not supported here.

The library we built to detect certificate revocation only supported OCSP up until now, so after checking your certificate successfully, when checking the intermediary (R3) it failed because it didn't find an OCSP endpoint. Because of this you may have seen this warning recently: 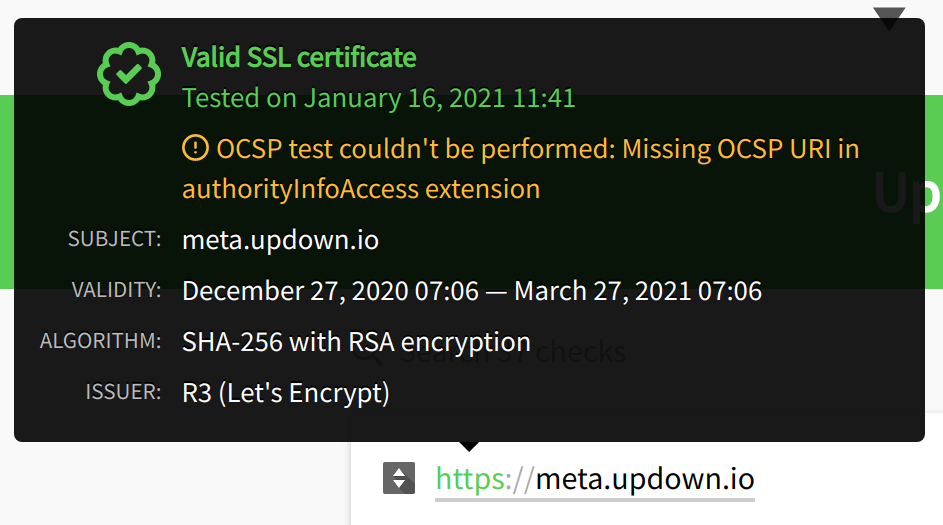 Up until now it was very rare for certificates not to offer OCSP, that's why we didn't implement CRL yet. But this new intermediate from Let's Encrypt (which represents more than 30% of all certificates on updown.io) pushed us to add support for CRL to our library. This is now done and deployed, so this warning on your certificates will disappear soon (at the next test).

Note: this change will also helps with a couple other Certificate Authorities (other than Let's Encrypt) which were already doing this, and also the ones which will follow Let's Encrypt move in the future.

If you still have some OCSP or CRL warnings on your certificates after that, and you're not sure if it's your Certificate Authority's fault, do not hesitate to ask us!

Up to now, partial connectivity issues where only IPv6 was down were considered almost like downtimes in updown.io, counting toward uptime percentage and showing as such in every timeline. This was on purpose because I believe it's important to push companies (especially hosting providers) to care about this more even if it may not affect the end-user when IPv4 failover is working.

Unfortunately as I feared the stability of IPv6 on the internet today is still disastrous and most hosting provider still don't care about it 😞. Which means updown then shows a lot of "false positive" downtimes which makes status pages look bad and clients concerned.

So I'm starting to improve this by giving less importance to these "Partial connectivity issues", they'll now be labeled more clearly as such in timeline and calendar view for example, shown in a different color, and will NOT count in the global uptime percentage any more. You'll still receive alerts.

On the other hand, downtimes impacting IPv4 only (and not IPv6) will still be considered as normal downtimes (not partial) as the current IPv6 deployment status is clearly not enough to consider this a "Partial connectivity issue".

More improvements are planned to better distinguish the two, such as:

Let me know if you have any feedback regarding these changes.

Are you a Statuspage user and tired of having to manually update it when you receive a notification warning you that one of your checks is down? 😴

Starting today, your life will be easier thanks to our new Statuspage integration! Hop on your settings page, follow the three simple steps needed and your Statuspage component state will be automatically updated when your check is down or back up again.

But that's not it! You can also add some metrics about your check's uptime, response time and apdex 📈

Less manual hassle and more transparency for your end users. We hope you'll be as excited as we are by this new feature!

Did you ever forget to renew your SSL certificates despite our reminders? We sent you notifications when they were about to expire, but now we'll make it even more obvious!

A warning will be shown on your checks listing page.

And we'll also remind you in your weekly recap email. 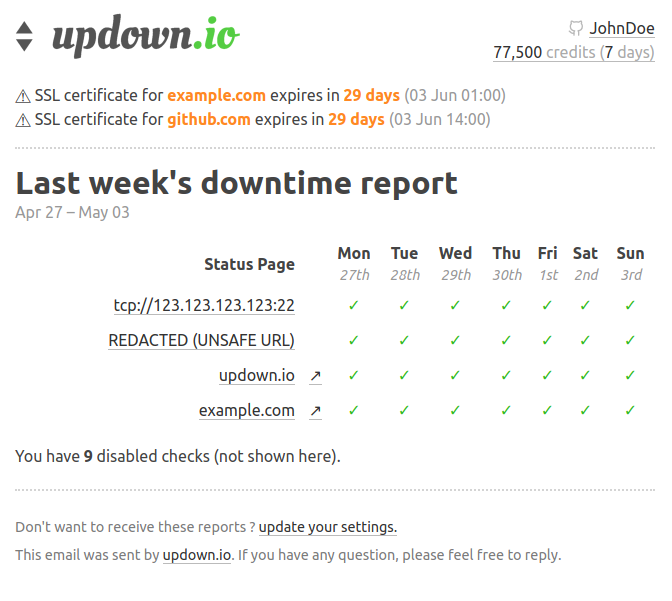 From now on, it'll be a tough task for you to forget!

We were already alerting you when your SSL certificate was invalid, but we decided to go one step further.

You will now also be warned when one of them is revoked. 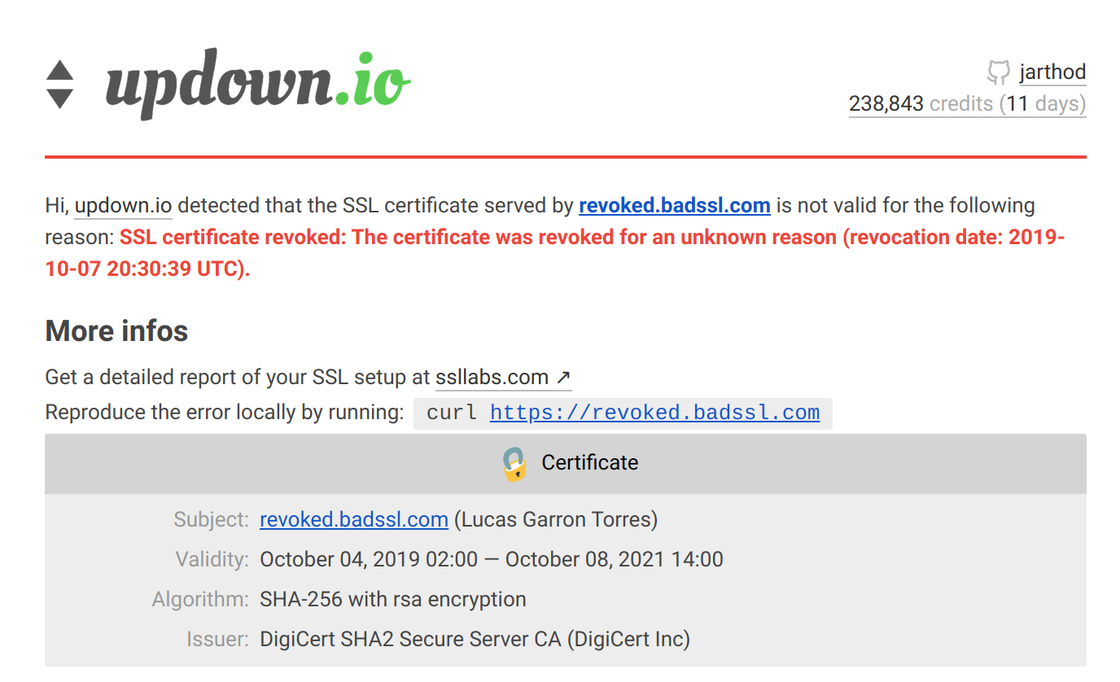 🚒 We've got a system status page!

Since the beginning there have been only Twitter and support email to know about internal and external issues affecting updown.io monitoring and alerting. Now there'a a new dedicated status page you can check: 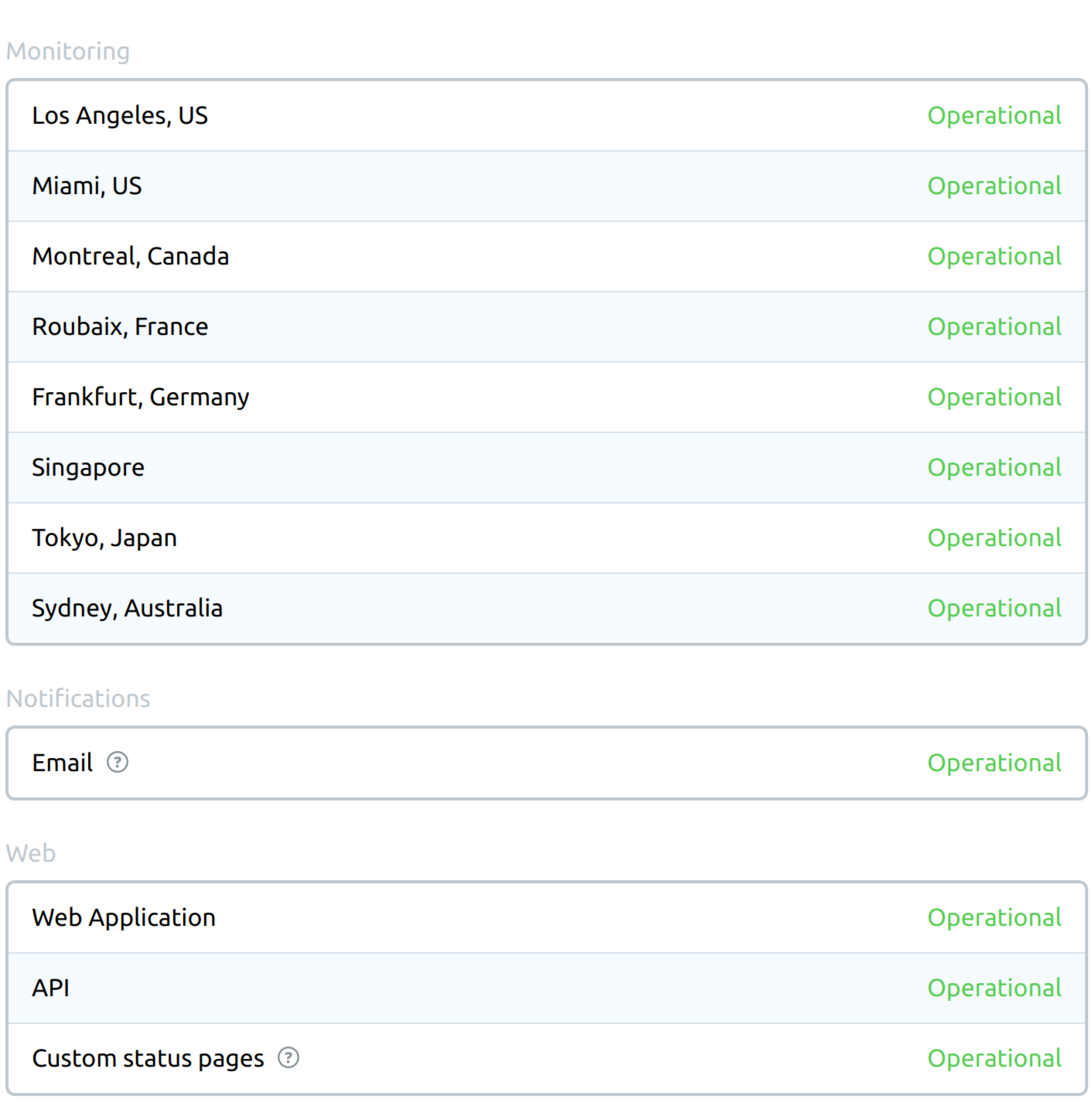 It shows the health of our status and is updated for the most part automatically (except for incidents and maintenances). So hopefully it should reflect the current status quickly (and if it doesn't, we'll improve it 💪).

You can subscribe here to receive incident notifications (these are created manually so not as quickly but with more details). You can already see two examples of past incidents.