When you launch a game in homework mode, you can now choose the assessment mode option as well. This is designed for pure assessment purposes and removes a lot of the gamification elements. It will make all other players invisible on the player's screen, hide the leaderboard and also disable powerups and answer streaks. From the teacher's perspective nothing changes - you will still be able to see all players on the game screen.

We've been upgrading parts of the application behind the scenes to improve performance. This is to make way for changes that should allow a larger player limit.

Unfortunately among these changes meant that the old animated dice is now broken so we've had to quickly replace it with a normal button. We will try to get it fixed as soon as possible, sorry for the inconvenience.

Good news if you teach large classes - we've increased the player limit to 100 players on the Pro version instead of 50! This is just in the testing phase now, as traditionally large numbers of players has been quite slow hence the 50 player limit. You will see a feedback form after you stop the game with a large amount of players in so you can let us know how it went.

After feedback from the last feature to manually mark open ended questions, a common problem is you can only mark it correct or incorrect. What if you get answers which deserve some credit, but not enough to award full marks? Well you can now set the specific amount of points to award partially correct answers: 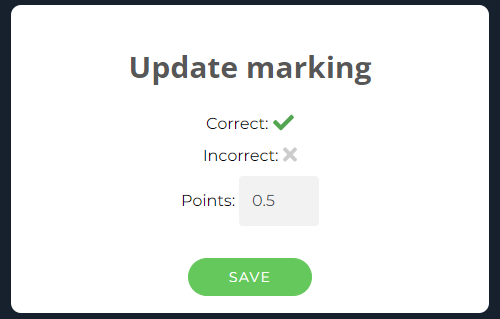 We've kept the user experience flow the same for now, so this modal will pop up when you click on the icon (see previous post).

Open ended questions are by default marked as correct since there is no way for the program to know whether what someone typed would correctly answer the question. This is still the case, but you can now manually mark these questions if you think a player answered incorrectly by clicking on the icon at the top right of the cell:

You will then see the cell turn red to mark it incorrect and the player's score updated to reflect this. You can easily reverse this if you make a mistake by clicking on the icon again (which will have changed to a checkmark):

Apologies for any inconvenience. We will start supporting other languages in the near future!

The Question Bank has been improved with folders being replaced with categories. You can now tag questions with multiple categories to better organize your questions.

You can also now write questions directly in your Question Bank as well as edit the questions.

If you have lots of questions this is great to prevent students copying each other as it becomes less likely students will get the same question.

Increase the difficulty with question timers

You can now set a timer on each question to increase difficulty! When time runs out, it will automatically switch to the next question.

To reinforce learning, by default questions will now be repeated until the player reaches the end of the race path. You can turn this off from the launch settings if you'd rather questions only appear once.

Note that currently only the first attempts at questions will be saved to the results.

New possibilities for your games

We've released several improvements to the way games work to unlock more possibilities for your games!

Click on a space to set an individual target on that space when a player lands on it. E.g. you can make the player move to a different space or change the movement to random for that space. This allows the possibility to build snakes and ladders style games!

You can still set the movement globally the same way as before, but now there is also the option to change it on specific spaces.

QuizWhizzer was originally designed with the idea of the background image being the center of the game and the spaces were only meant as a tool to tell the program where the players moved and you would hide them once the game was active. However we've realised this makes it difficult to find a good background image for your game.

Now you can choose from a selection of image assets for your spaces, which makes it easy to create an exciting game board! The space image can also be overridden on individual spaces by clicking on the space and changing the image. 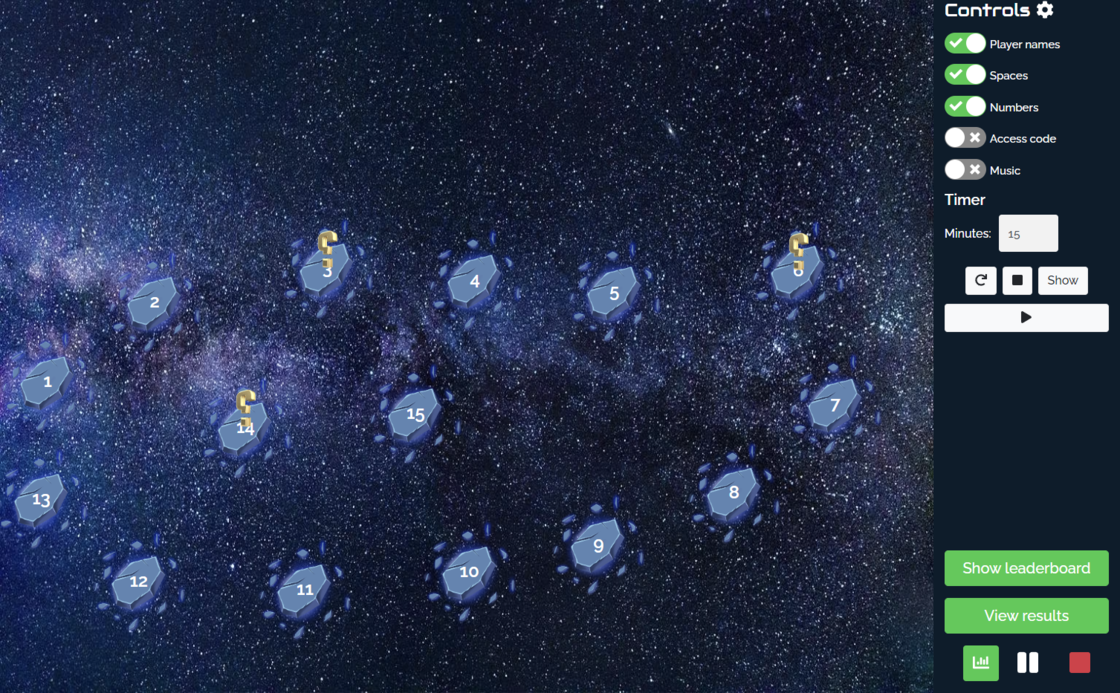