A better way to add skills to your framework

As our skill library has grown from around 40 skills to over 100 and from 1 publisher to 5, the original interfaces we created for browsing and finding skills have needed an upgrade. Today we're updating our "skill picker". 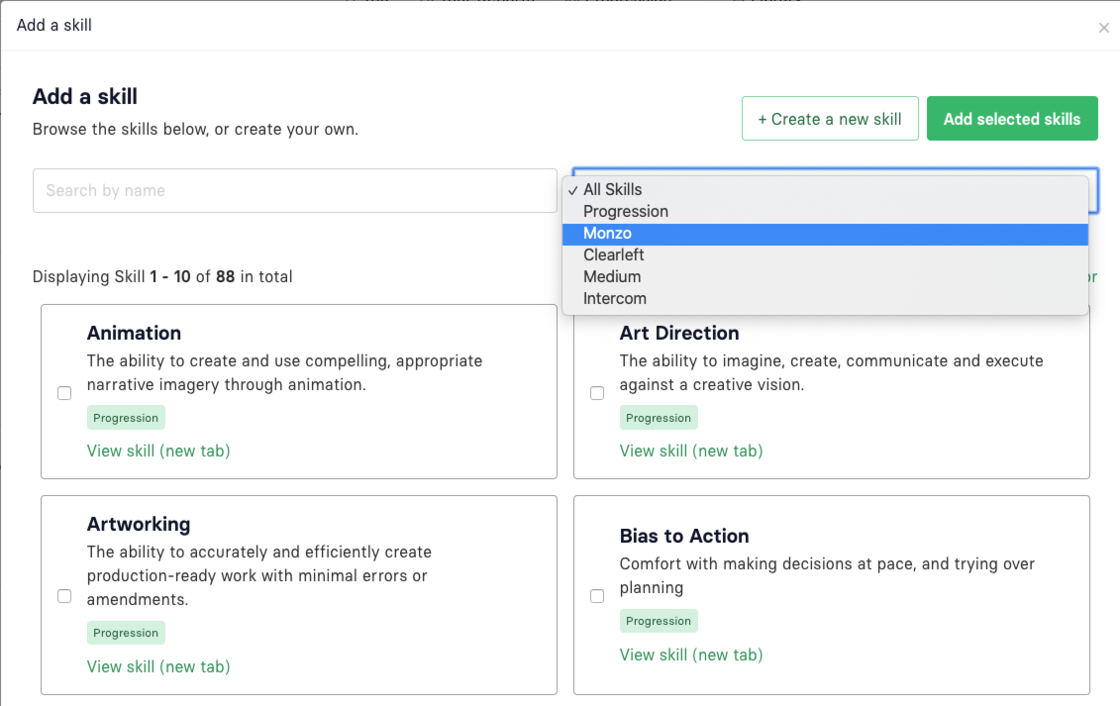 Now, when you're adding skills to a framework, you can filter by publisher and search the skill library.

Over the next couple of weeks we'll be rolling out updates to how organisations can browse their own skill libraries as well as updated Progression skill library.

A key feature for supporting larger teams is enabling imports of users and then syncing that data with Progression. We've taken the first step in rolling that out with our new CSV export import & sync feature.

You are now able to download all your users in a CSV, including fields like name, manager, team, position and active status. You can then modify and reimport. We'll create new users for the ones that don't exist and update existing users where the emails match. All this happens as a background process which means it can easily scale to support the import & sync of thousands of users.

Eventually we'll use this same technology to allow you to connect your HR system so all your users are automatically kept up to date.

An all new people management page

As our product and business mature we find ourselves thinking about how we can support larger and larger teams. A key piece of this is enabling admins to more effectively manage their team members.

Our first stab at this, the org people page, got us some of the way there but we were aware of issues around page load times and ability to filter.

That's all changed with the new version of our people page. 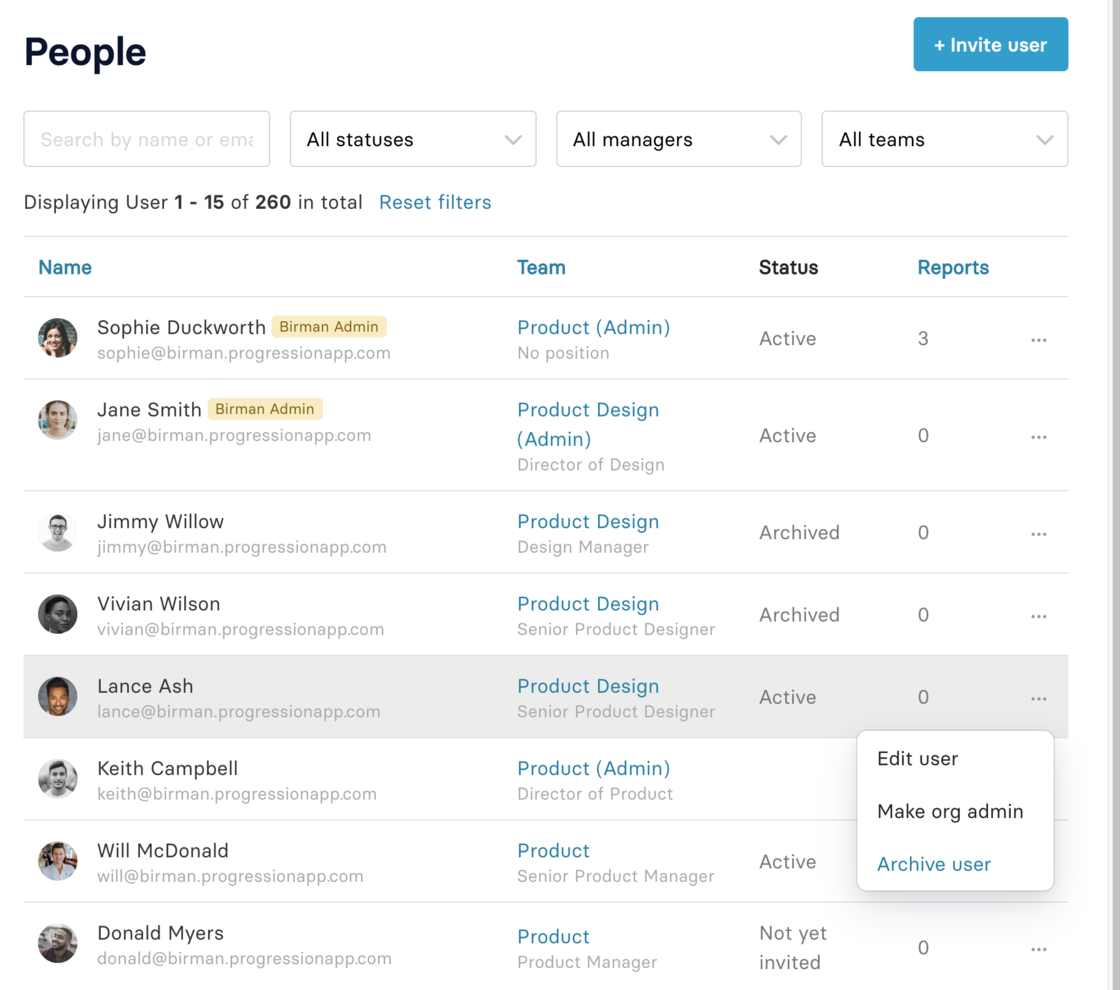 We've combined a much cleaner look with massive performance improvements and added some powerful filters. You can now search by name and email, filter by status, find reporting lines for managers and filter by team membership. We've kept the same "one-click" management actions so you can quickly edit and update your users.

This is a pattern that we'll be reusing in the future to better enable org admins to manage check-ins, skills and other moving parts of their organisation.

Move all positions from one discipline to another

When building a framework a common occurrence is that you create a set of positions in a discipline, let's call it "Design", and then you realise you named it wrong and you want to rename it.

Up until now that's not been easily possible, you had to create a new discipline and then move each position over.

We've now made this much easier. You can easily transfer all positions from one discipline to a new or existing discipline. Just look for the vertical arrows when you edit a discipline. 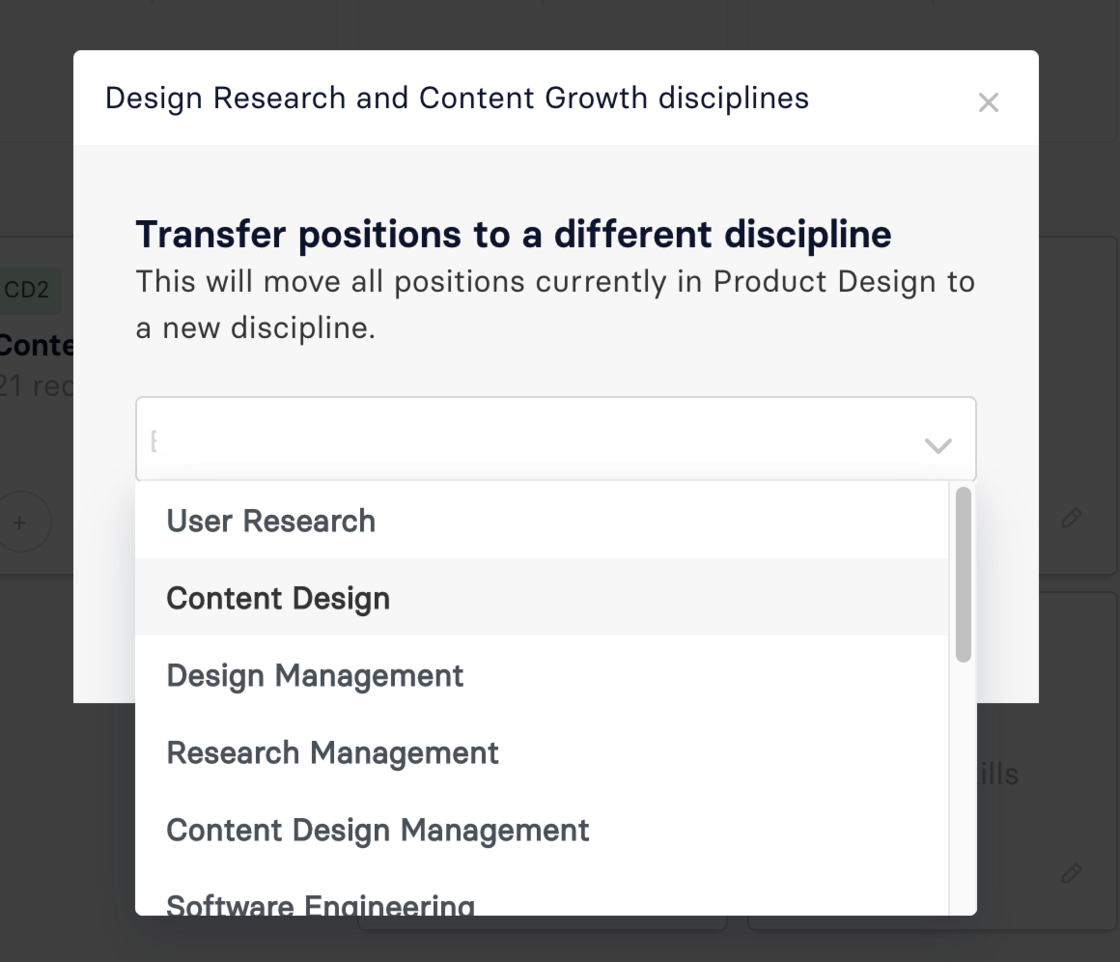 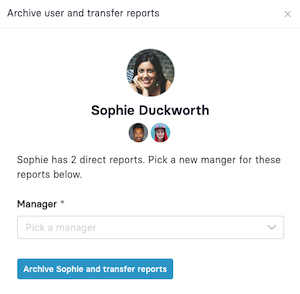 Today we have a bit of an "inside-baseball" update. It's been weeks in development but will have a very minimal impact on the user experience. 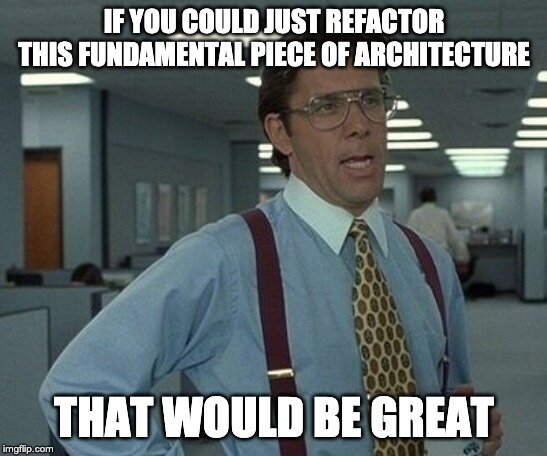 The back story is that when we first came up with the architecture behind Progression we assumed that user management would be centered around the idea of a Team. Each Team would have an owner and would manage the other people in the team as well the framework content.

From this we created the concept of a Membership which represented a person's relationship with a Team. The Membership specified the position the user had in the team and the user's manger.

This lead to some unintended consequences, where in order to have a manger, a user had to be a member of team and a user's manager had to be in the same team. As we've taken on more customers we've realised this doesn't represent how their teams are structured.

In this update we moved the manager relationship off the Membership and on to what we call the org_user a record which represents a user's connection to an Organisation.

The rollout of this change helps us better define the Team owner role as the person that looks after the framework and position content but not a person that can manage others, unless they happen to be another user's manager. (We appreciate the roles and permissions can get confusing so we'll shortly be rolling out a matrix view of these as part of our help docs.)

As well as the re-architecture, we've also taken this opportunity to increase the number and surface area of automated tests. All of which will be a solid foundation for future product development and help provide a more stable service.

We've added some nice data-viz to the position compare page so that you can get an at-a-glance view of how the requirements for two positions differ. 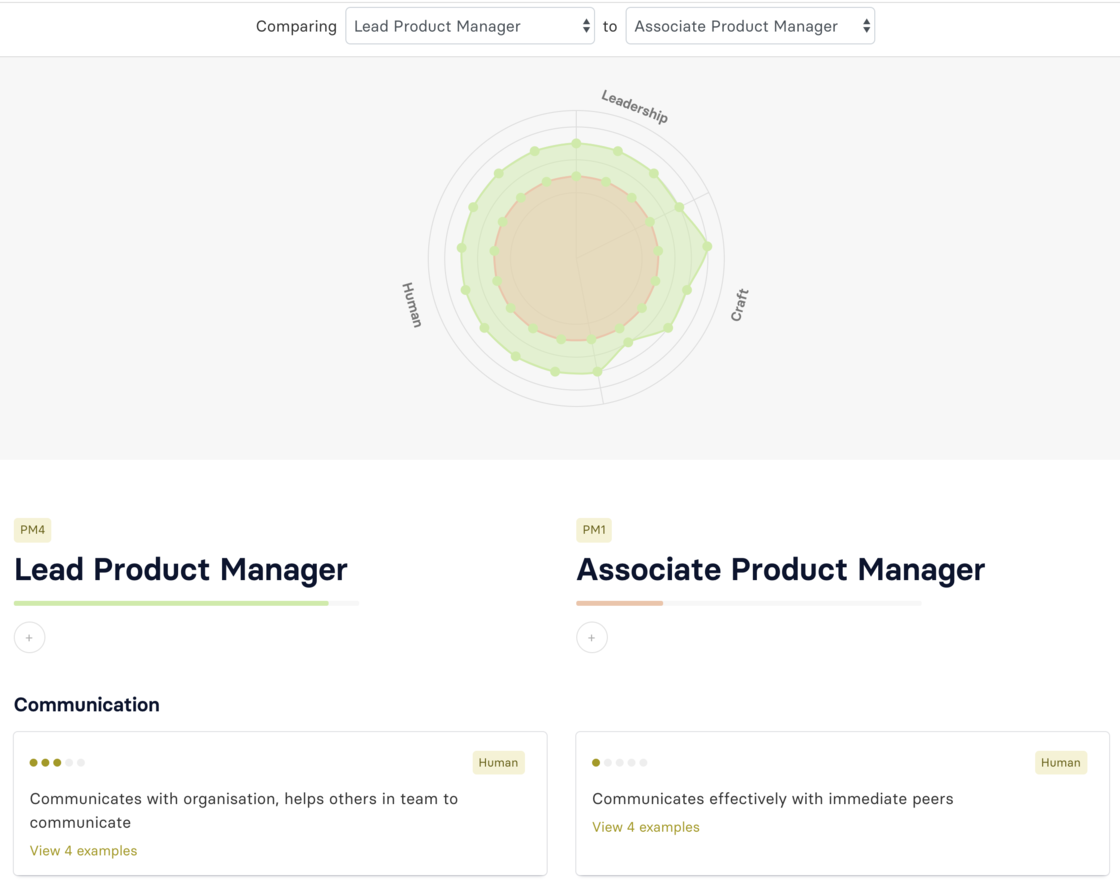 Compare your check-in with any other position

If you've ever wondered how you would need to grow to move laterally in your organisation, get your next promotion or even become CEO, this release is for you!

You can now take your existing check-in and compare it with any other position in your organisation. 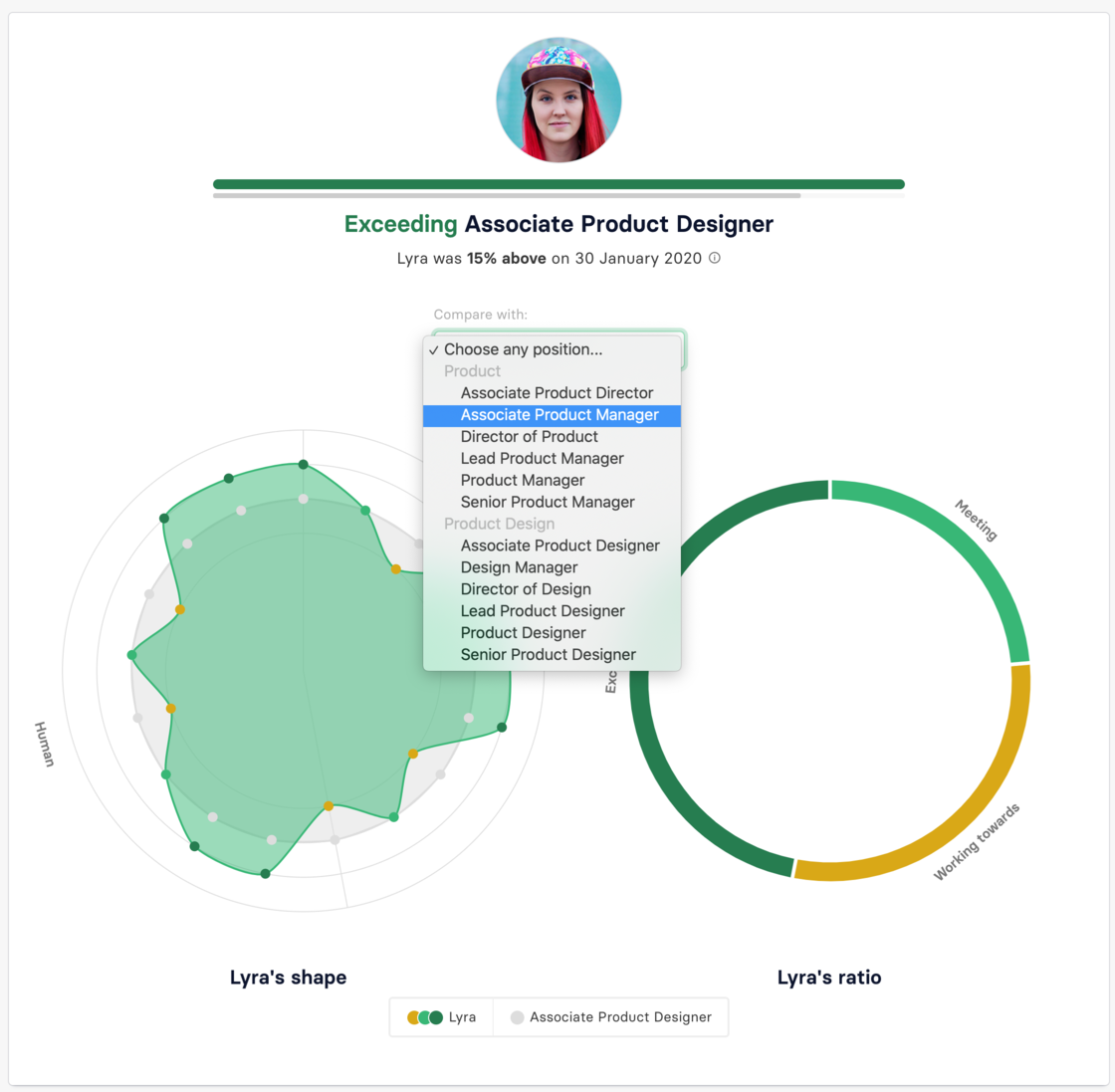 Check-in against any position

You can now check-in against in any position, not just the one you're currently in. This is great for people that have been in their role for sometime and are thinking about how they can grow into their next role. 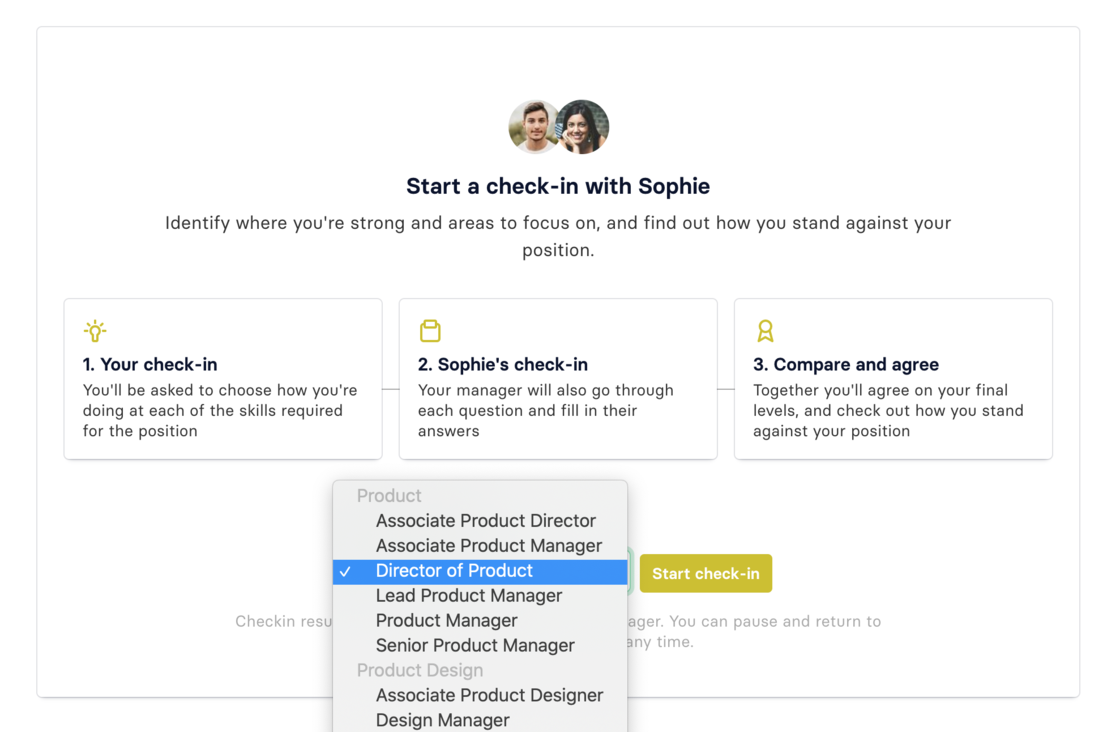 Loads of little fixes out today: