illumnus Named To The GSV Cup Elite 200; Will Compete for $1 Million in Prizes in World’s Largest Pitch Competition For EdTech Startups

OneLXP by illumnus® has been selected as a semifinalist among 200 leading pre-seed and seed education technology startups competing to win the GSV Cup, with a prize purse valued at $1 million. Semifinalists are recognized as top innovators in the EdTech sector, disrupting the way people teach and learn worldwide. 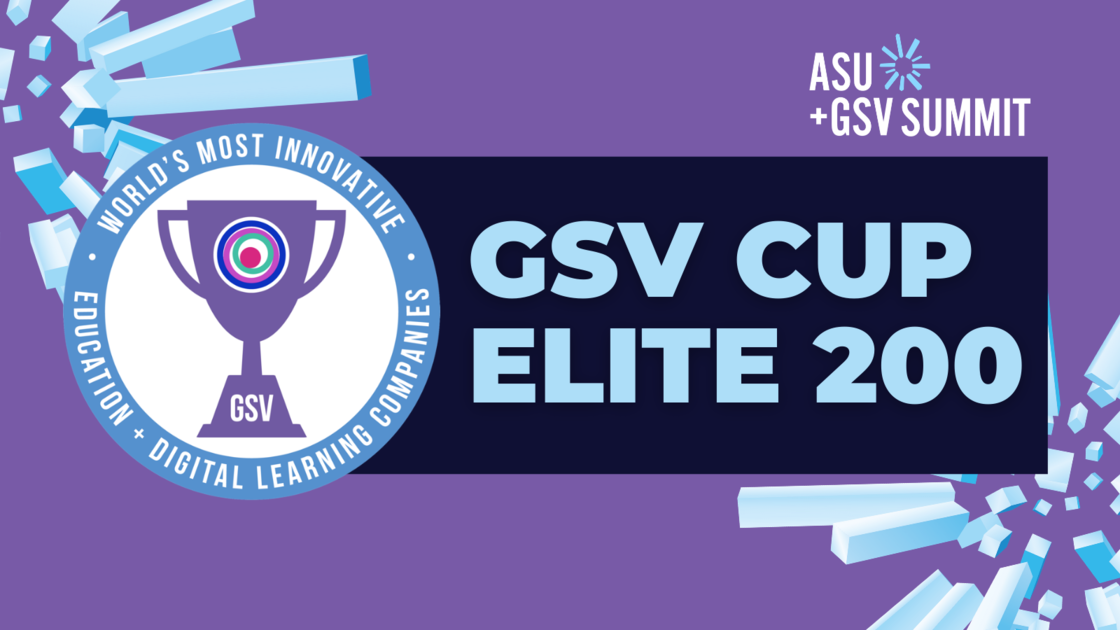 OneLXP by illumnus® has been invited to pitch to an esteemed panel of judges from global venture capital firms and strategic education companies at the ASU+GSV Summit taking place August 9-11, 2021 in San Diego, California, and virtually. The prize consists of $550,000 in non-dilutive capital and $450,000 in Google Cloud credits.

“Congratulations to OneLXP by illumnus® for being named to the GSV Cup Elite 200,” said Deborah Quazzo, managing partner of GSV Ventures. “As the world moves from Before Coronavirus (B.C.) to After Disease (A.D.), we are seeing a surge of innovation in EdTech -- the dawn of the age of digital learning -- driven by entrepreneurs on a mission to improve lives through education. These ‘weapons of mass instruction’ have the power to transform teaching and learning. OneLXP by illumnus® was named a semifinalist in an extremely competitive contest of EdTech startups around the world and will now compete for $1 million in non-dilutive capital and prizes.”

OneLXP by illumnus® was selected based on rigorous criteria by a panel of 152 esteemed judges from global venture capital firms and strategic education companies. The GSV Cup is powered by Google Cloud, HubSpot for Startups, HolonIQ, and GSV Ventures. Applicants were evaluated by the world’s leading investors, including Accel, Alexa Fund, Brand Capital International, Epic Ventures, Founders Circle Capital, Owl Ventures, and Reach Capital, among others.

The GSV Cup Elite 200 are semifinalists and will compete for the $1 million prize. They will be invited to participate at the ASU+GSV Summit taking place August 9-11, 2021, both virtually and in San Diego, with a live audience voting for the finalists. The ASU+GSV Summit is the annual education technology conference hosted by GSV Ventures and Arizona State University. 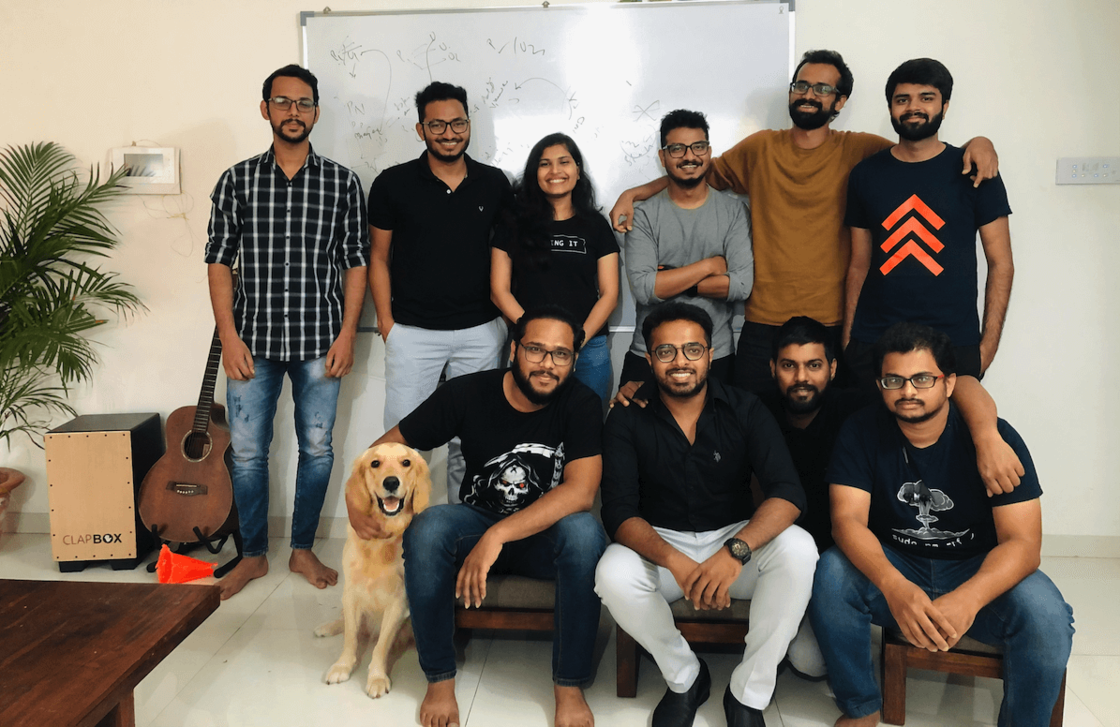 The second annual GSV cup is the world’s largest pitch competition for “Pre-K to Gray” early-stage EdTech startups, with more than 700 startup applicants in 2021. These innovative EdTech companies help ensure that all people have equal access to the future through technologies in early childhood, K-12, higher education, adult consumer learning, and adult enterprise learning. This year’s Elite 200 represent diverse backgrounds and locations:

To see the full list of companies selected to the GSV Cup Elite 200, visit https://www.asugsvsummit.com/gsv-cup-elite-200

We are super excited to see how the future unfolds with the massive demands and growth. Wish us luck for this one! :)

Brief about the company - illumnus:

With the vision of transforming education, illumnus is an innovation-driven Education Technology startup by 2nd-time Technology entrepreneurs/educators and alumni from IIT Bombay & BITS Pilani.

Brief about the product - OneLXP:

The core product is a B2B SaaS-based collaborative Learning Experience Platform for Universities/Schools. We are changing the way how education is experienced in schools through modern technology, ultimately improving learning outcomes

In our opinion, the startup is about working for a vision, fighting constraints, optimizing resources, reducing costs, and ultimately work towards generating higher revenues and greater adoption.

Previously, illumnus followed enterprise sales strategy, for which the Sales Cycle was Resource-intensive and time-consuming.

Now, we are launching a new product, OneLXP. In this, the end-user/admin of the school can setup their school in less than 2 minutes with the easy self-onboarding flow. Later, as the stakeholders of the school get used to the platform with its freemium model, the possibilities for Cross-Selling and Up-Selling open up.

So, what does this mean to the company?

And, what are we targeting?

We are starting with the early adoption of the new product by targeting/onboarding Indian CBSE Schools. We have 21,000+ schools in this category. By July 2022, we plan to onboard 500+ schools with this strategy.

We are also launching an "Early Access Campaign", through which the first 20 schools will get the Pro version (For an unlimited number of students) of the product for a mere $150 for a whole year. Here are the details of the same: https://pages.razorpay.com/onelxp (Valid for only Indian CBSE Schools)

We are planning to conduct a Clubhouse session soon. Meanwhile, If you have any suggestions, you can write back to me directly at akash@illumnus.com.

There are some rare defining moments in your life. Such a moment is for us today!

Scott McNealy (Co-Founder/CEO of Sun Microsystems, creator of Java) offered to support us towards the future of Education across the globe! 😁

He is also the founder of @Curriki which is a wonderful content-creation platform for K12 Education.

Watch what Scott has to say for OneLXP by illumnus®

What does that mean for our users?

Soon, We will be integrating Curriki Studio for the content creation inside OneLXP. Yay!!

illumnus gets covered in Top 10 EdTech startups of 2020 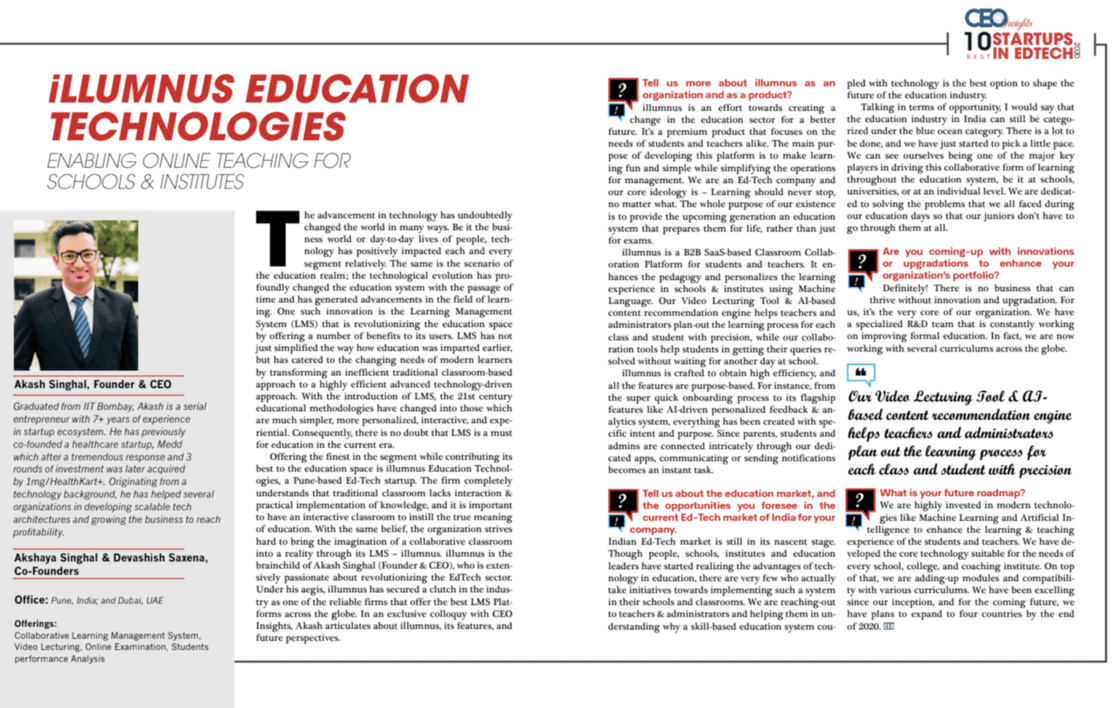 If there were an oft-overlooked factor in online school management that reflects poorly on the school’s brand and outlook, is the poor attendance management system.

However, not all data is useful. Attendance data can only be effective when collated to reflect students’ learning experience, teachers’ effectiveness, and consequentially, students’ performance. As a missed school day is a lost learning opportunity for the child and as a primary element of the school’s administrative processes, OneLXP has eliminated the hassle of manual attendance record maintenance by automating the entire process.

Which school would not want to optimize their students’ and teachers’ time spent in class? The question, however, is that how does an automated attendance system benefit the stakeholders?

We walk you through the features OneLXP, an end-to-end Learning Management Software, offers in managing attendance effectively:

Despite the transition from nice-to-have to must-have, live online classes are still a management nightmare for institutions globally. But not anymore!

The benefits of live online classes are not restricted to class timings or the application’s undeniable intuitiveness. Rather it can be extended to extra one-to-one sessions when a student cannot comprehend a concept or other times, promoting class interaction. 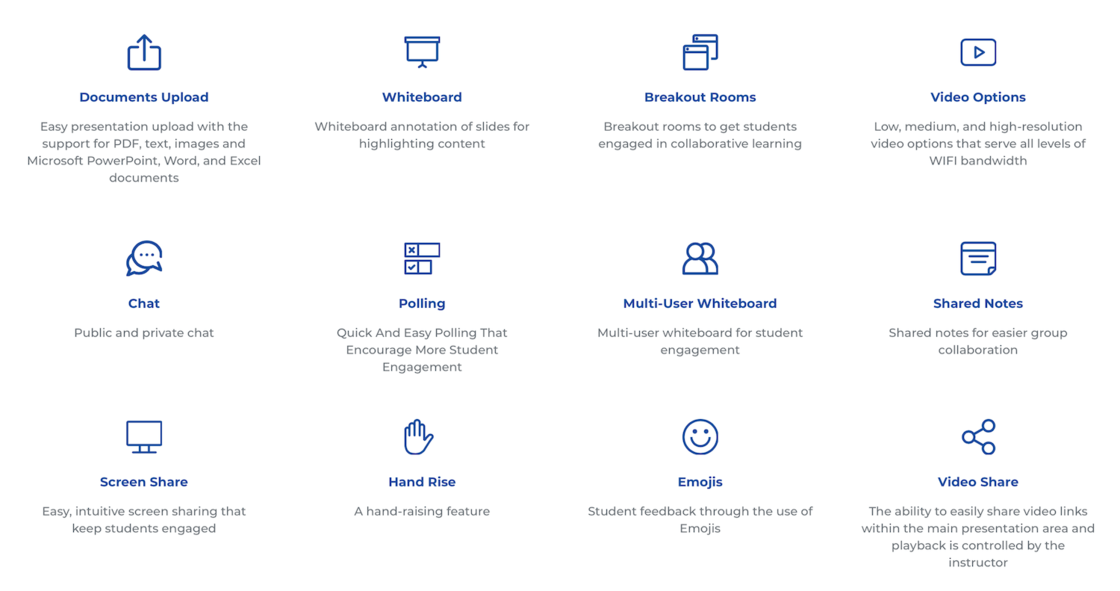 While OneLXP has cemented the concept of stellar student-teacher classroom experience technologically, we leave the teachers room to focus on expanding themselves, complimenting the teaching experience. Teachers can optimize their professionalism by:

Big news today, we're starting a public changelog so you're always up to date with all the updates, improvements, and fixes that are made in your one and only OneLXP.

Even though we work on OneLXP all the time, sometimes it may seem that not much is happening. This changelog is here to improve that very important part of the communication between you and us.

You'll always receive an update when we change something in the widget, or if needed all things we've changed is available on our public changelog page.