Being able to share profiles has been a huge boon, and Riot has been keeping the #profile-sharing channel alive and kicking for months.

This alpha brings with it some frictionless change to profiles to allow you to version them, back them up, document them (see below), make them more discoverable by users both with and without MIDI devices.

This alpha will build out those key features, but this first build will transparently convert your profiles to a brand new format ready for expansion!

In case you wish to revert to the stable build, your current profiles are kept entirely in-tact and will never be removed.

A new profiles screen has been added to pool presets and custom profiles together in to a single list.

In addition, all loaded profiles are now collected at the top of the list. I don't know about you, but I was struggling to find all of my active devices once my list had hit a certain size!

The icons to the side are used to represent the type of profile. A lightning bolt ⚡ is a preset, a circle 🟢 is a custom profile, and a cloud ☁️ is a shared profile. 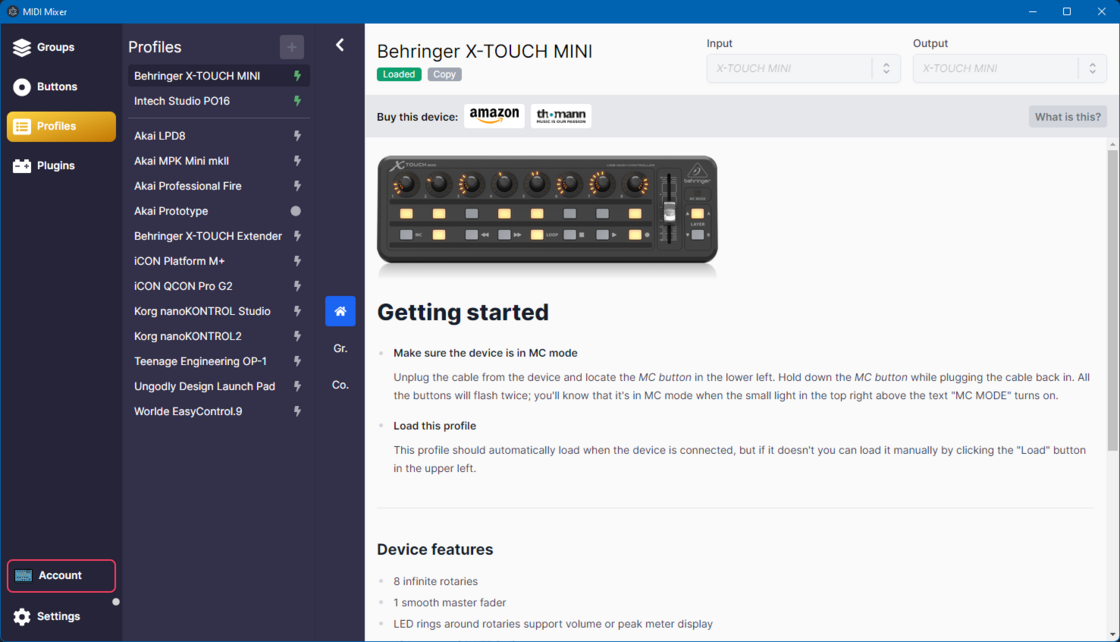 To help along this new sharing venture, intro pages have been added to profiles to explain not only the device being used, but also how to set up that profile and the cool configurations within it!

Even with presets there are some very common pitfalls that catch new users such as turning on MC mode or driver difficulties. A page to encapsulate this knowledge right where a new user will be looking should really help.

In addition, there are some awesome creations on the aforementioned #profile-sharing channel. Sometimes folks upload videos and they've sat down and made something really enjoyable to use. Let's make sure there's a place to share that. 🙂

Pages are written in markdown alongside a profile's JSON configuration. A later build in this alpha will introduce the simple UI to edit and save these pages against your own custom profiles.

The top priority of this sharing and profiles expansion is discoverability of all of the fantastic things people are doing with MIDI Mixer and exposing them in-app for every user to see.

A later build will introduce better, versioned profile sharing (and backup) which results in a huge searchable database of creations.

A brand new user who owns MIDI devices could be directed straight to a collection of compatible profiles (complete with pretty intro pages by their authors, of course 😉), while one with no MIDI device could choose what kind of device they want and see a tonne of examples that have already been created by the community.

"Legacy" profiles that have been shared using the current URL-based system will still be importable, but you will no longer be able to create new versions.

I can't wait to see this feature through and share everyone's awesome creations!

The UI is now resizable! 🥳 This has been a silly but long-awaited change. A few screens continue to look a bit funky, but those kinks will be worked out during the alpha. 😉

MIDI Mixer's core was sometimes failing to boot on x86 systems without a particular .NET redistributable.

A profile was not unloaded if removed when loaded.

Alongside a small site reshuffle late last month, affiliate links have appeared in appropriate areas of the app.

There are informational buttons in those areas to see more, but you can always check the Affiliate Links section of the Contribution guide to see the most up-to-date information.