I've been working on this for a while so I'm excited to say I've finally implemented the ability to edit and download images in a wide and Story format, as well as the original square image size.

This means it's easier than ever to create great social media graphics with InstantCard.

Just select a value from the new Size dropdown in the inspector and start editing!

I've also replaced the library I was using to generate and download the final image which has resulted in faster downloads across every device and operating system, and a much improved download experience on iOS.

If you've tried to sign up to InstantCard recently you may have noticed an issue with the Instagram connection when fetching your profile picture. Unfortunately it seems the connection to Instagram is too unstable to warrant keeping it up, so I've removed the connection altogether.

What it means for you

To sign up you now need to upload a profile picture rather than fetch it from your Instagram profile. We will make this step optional in the future so you can skip that part to start making great graphics.

It also affects the changing of your profile picture in Settings, which now requires a file upload as well. 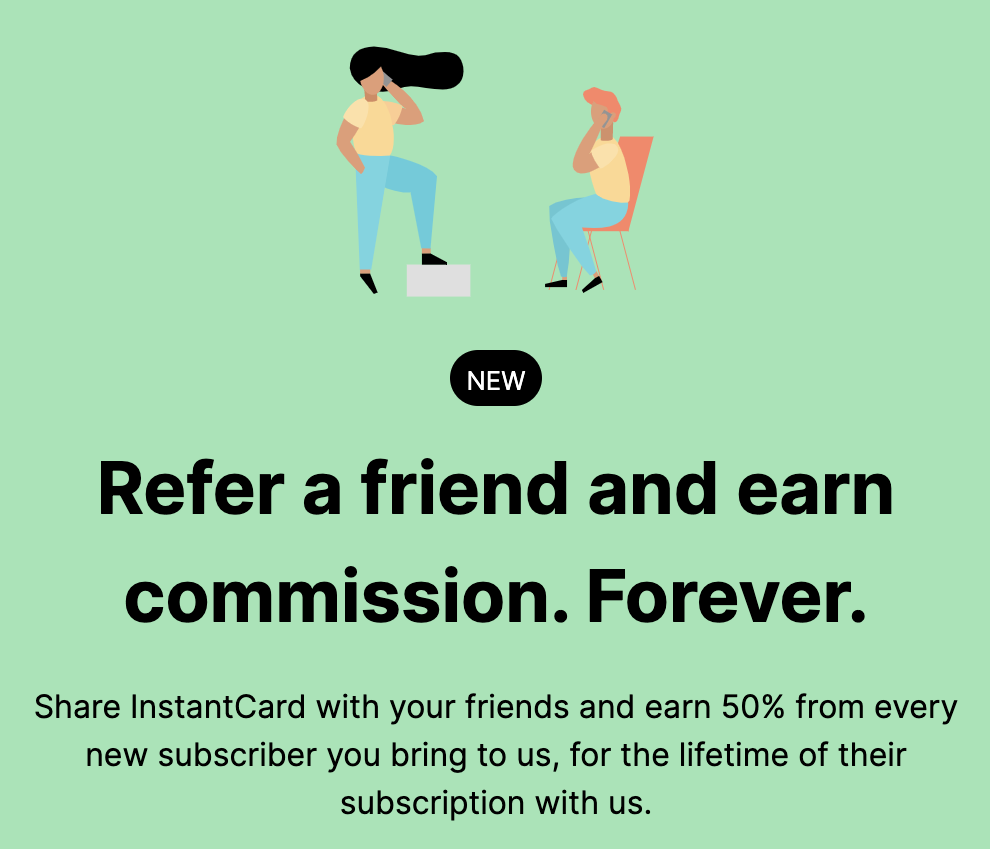 Every subscriber now has a unique, shareable link accessible from instantcard.co.uk/refer-a-friend. By sharing that link and getting your friends to sign up to InstantCard, you can earn 50% from their subscriptions for its lifetime.

You can read the full terms and conditions here.

You can also now use images from the brilliant Unsplash library to set as the background of your InstantCard. If you're looking for a high quality image that makes your card pop, just click the new "Search Unsplash" button and start typing to find the perfect image. 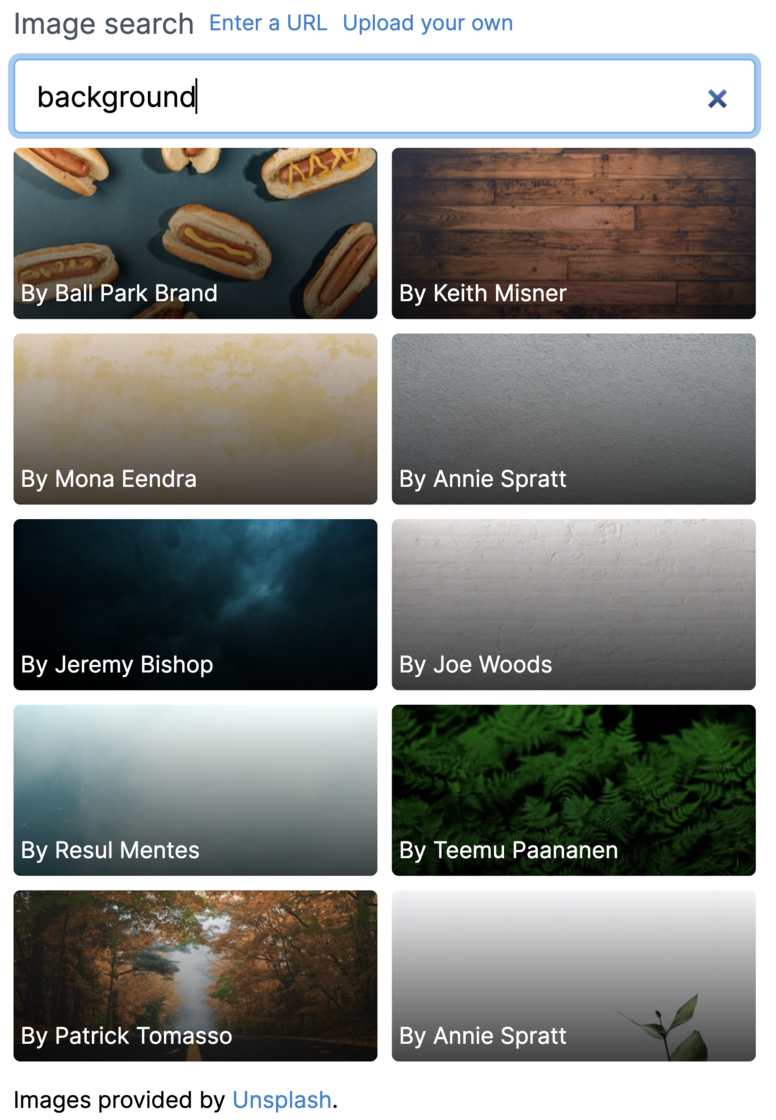 🅰️ Boldness is back

Well, we’ve added that back in.

Some users were experiencing a bug on iOS where their downloaded image had black bars on either side. No more!

We fixed an issue with our image renderer which was causing the black bars, so they'll never appear again 🙏

You asked, we delivered: we now offer more fonts!

InstantCard integrates directly with the Google Fonts API to fetch the top 50 most popular fonts, so your InstantCards can be more personalised than ever.

Rather than restricting you to left, right and centre aligning, we're taking a leaf out of social media's book by giving you the ability to drag your image to align it, just as you do when selecting a new profile picture or header image. It's much easier to use and gives you greater flexibility over how your final card looks. 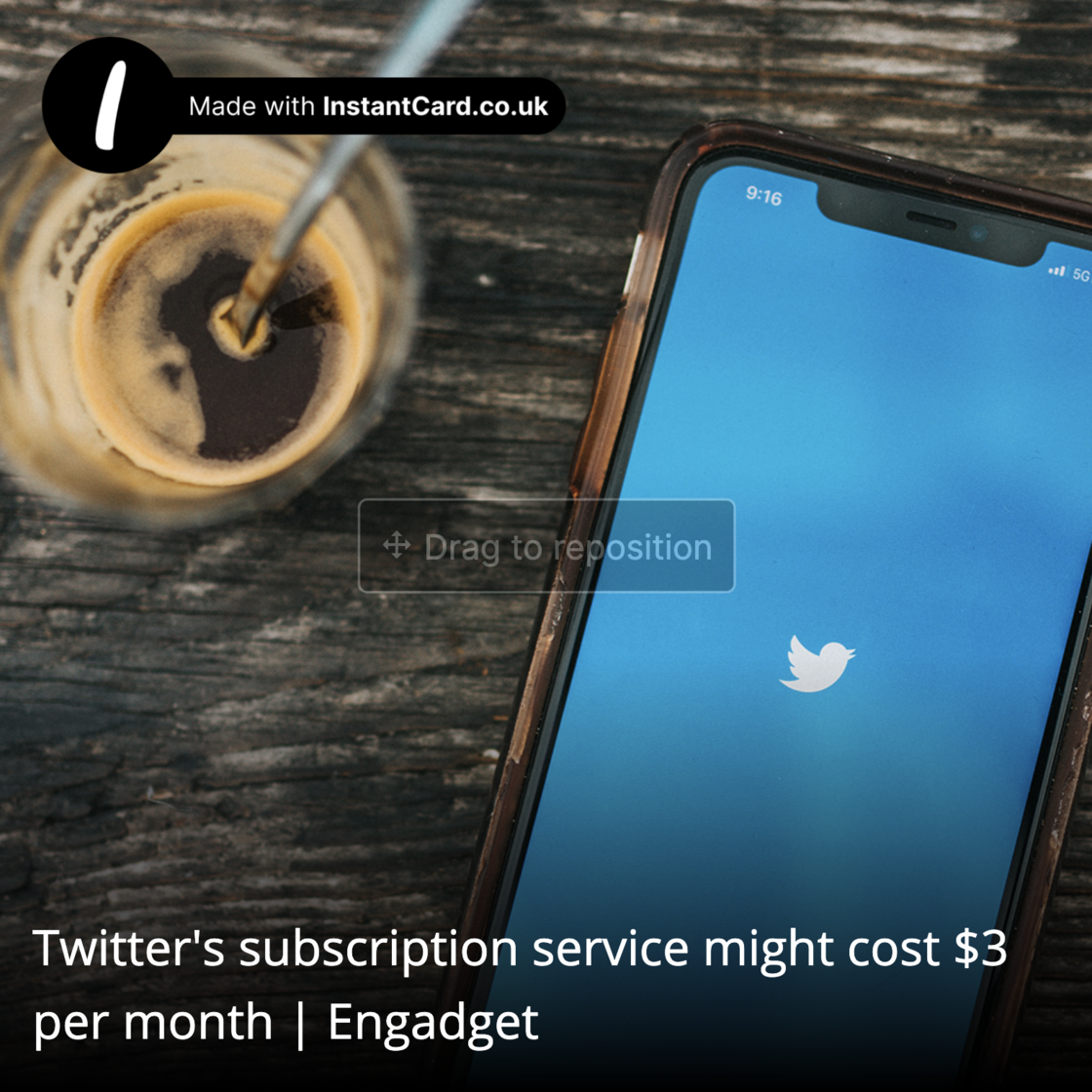 We're handling image processing in the browser now, too, which means images will load more quickly, too, especially those you select from your computer.

We've also made it easier to edit the text on your card. You can update the headline by simply clicking on it, or tapping on it on a touchscreen, and typing! It's that simple.

🎨 Background colour, all the time

On Monday, we launched InstantCard on ProductHunt. We had a great deal of feedback from across the world, and set about making improvements to our tool straight away. 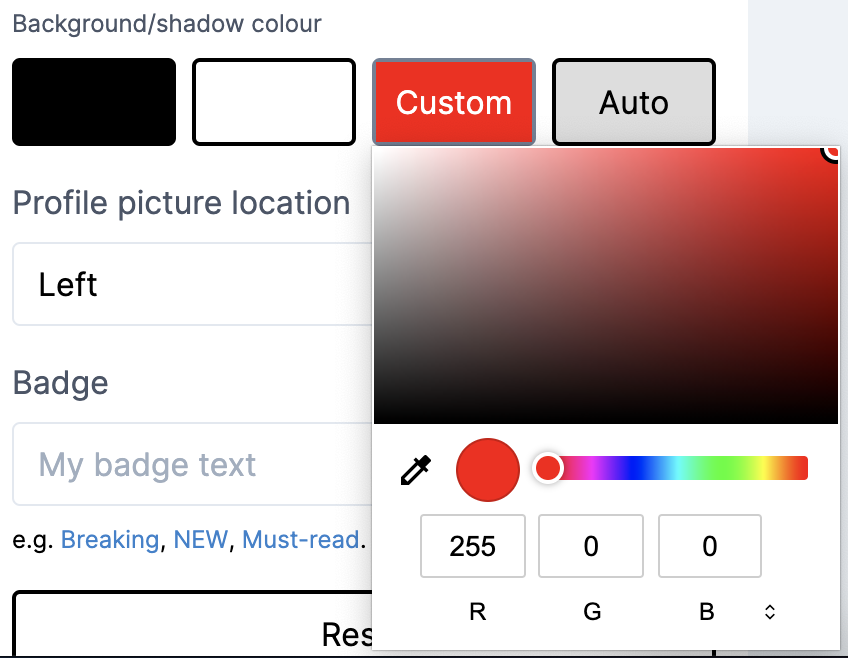 One of the key pieces of feedback we received regarded the use of transparent images as a background to your card, which always defaulted to black when the image was cropped.

Well, now we've extended the background colour feature so you can use it all the time.

We've also extended the colours to include black, white, auto (the average colour of your image) and a custom selector so you can choose any colour you like. And we'll automatically change the colour of the headline for you depending on whether your background is light or dark.

💾 Auto-save, error handling and much more

Over the past few months we’ve been working hard on some new features that we’ve just released and we’re really excited about them!

Starting today, changes you make to your InstantCard in the sidebar show up on your image…instantly!

You no longer need to press the “Create” button to generate the card, which means our tool feels more responsive and takes you less time to use.

We’ve also placed a message underneath the “Reset” button in the inspector to let you know the last time a change was made. This should help you keep track of any changes you’re making while you’re generating your card.

Starting today, you can now choose from two more font sizes with which to display your headline.

To reflect this choice, we‘ve also switched the font size selector to a slider control, to make it easier to change the size of your headline and try out different looks.

Sometimes, something goes wrong and there’s nothing anyone can do about it. When that happens, it’s nice to be told so you can react accordingly.

That’s why we’ve added some messages that appear on our site when things don’t quite go as planned. For example, should you try to generate a card with an image greater than 25MB (the limit on our image processing system), we’ll tell you!

Happy new year! To mark the occasion, we've moved away from server-side generation of images to creating them in the browser.

This results in faster and more consistent image creation across a number of browsers and networks of different quality. It also means we rely on fewer external dependencies which is always good.

We've also added the ability to hide the profile picture from your generated card.

We know not everyone wants to emblazon their images with their profile picture, so now you have that option.