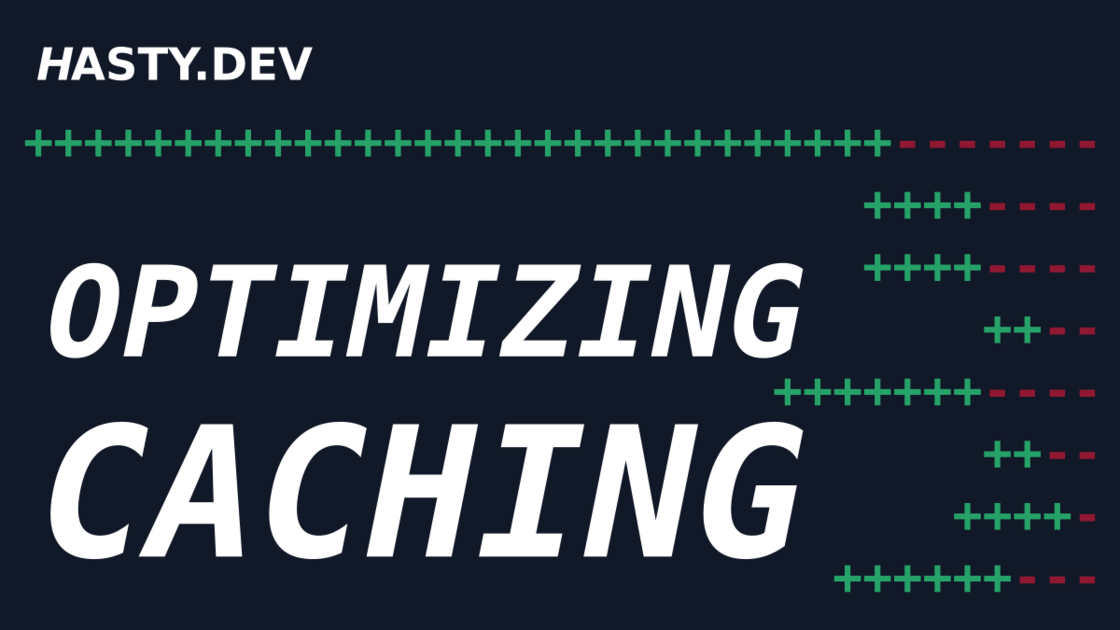 I might not have been very active on the socials - namely Twitter these past weeks. Due to some personal reasons, I have not been able to work on any side-projects. Sadly, and I'm so, so sorry! 😢

Today has been very different though! I've been typing away, and quite fast - if I should say so myself 🥹

Thus, prepare yourselves for the new and massively improved hasty.dev! 😍

We all love those fast and snappy site, right? Well, the secret sauce is sometimes caching, something I've not implemented on hasty.dev - until now! Whoop! 🚤 So, please, enjoy the power of caching!

Of cause it won't be cached for ever, just a few moments, so if you might click the Run by accident right after another run, this won't hurt anybody now.

What happens if you change the code, then? Well, it's a completely new payload, meaning the tasks will be run anew! Also, the percentages will update according to these new op/s.

Quite a few new improvements, I don't even know where to start 🤷

Use the proper fetching mechanism for the front-end - this has been a tech-debt for quite awhile. I'm using SvelteKit, just FYI. Simply haven't been able to love any other front-end SSR framework as much!

Along with this, I've messed a bit with the request and responses, these are now far smaller than before! This should - maybe - equal to some faster answers to whatever you might seek!

The API got the largest overhaul, this also means the deployment process. The docker-image is now exactly half the size of what it used to be! - Did somebody say faster releases? Heck ya!

All in all, clarified the code for future me to work in - I'll love past self in the future 🤗

What about being able to see those variable texts of one of the notebooks, those are much better handled now. You're welcome! 🤩

Hopefully fixed issues with the API, that unfortunately seems to disconnect from the data-store at randomized weird moments 🫣

Also, a big mystery still is the recovering from a complete panic, these are still on a testing basis, but might the right ones now.

On other - related - news: I have decided to try out with the new (a tad old) kid in the yard! Mastodon, here I am… @Mobilpadde@techhub.social.

I've decided that the ads aren't bringing any value to the users of hasty.dev, so for you lovely people out there - hasty.dev is now compeletely ad-free and free to use in any and all ways! 🥰

To be honest, I got a weird ad, that had no home on a developer friendly app like hasty.dev 🤷

In case you've found a really interesting notebook on hasty.dev and very much would like to edit it, rather than re-create it yourself. Fear not! I've got you covered, it's now possible to edit via the Options-menu button down besides the Run-button! 🥳

Made the Embed-itself prettier and more friendly to any design 🥲

Added six sorting algorithms to test from and against one another. These has been added so far:

Finally added indentation to all code! So beautiful 🥲

Pages are now live! - at an early stage though.

Lots of SEO optimizations, just for you to be able to find https://hasty.dev if you ever forget the URL. 🥲

Love is in the air 🎼

Love is in the air 🎼

I've added a range of new pages, it can be found by clicking on the Wall of Love-button from the front-page or directly accessed by navigating to hasty.dev/love/1 👋

Thank you guys, for being such a lovely crowd 😍

Improved the embedding builder experience quite a lot. It's now way easier to manage, and not as many steps.

Added Headway to keep you guys posted about the updates!

Changed cloud provider, as there were some issues with using too small servers. So I decided, to be in the best interest of my dear users, and upgrade the server 😍